You want to hear something really ironic? For the past two-plus years that I've been living here, I've been bringing my coffee in from the States. Don't judge me, people. I have to tell you that I am pretty particular about my coffee. It's got to be bold, smooth, and full-bodied.

I've come to understand that the Mexican palate prefers a lighter blend than I am used to. Seriously, if a coffee quenches my thirst, something is wrong there. So, there's Starbucks (which doesn't taste the same here!), and Coffee Bean and Tea Leaf (which I love, but seriously- who wants to drink CBTL while in Mexico?), and I tried all the bags at the supermarket, hoping for a "Cafe Rico" discovery. (On a side note, Cafe Rico is Puerto Rico's RICO (meaning freaking YUMMMMA) coffee, which (I'm told) only costs a dollar!! Yumma!) How's that for parenthetical?

Anyhoo, I finally found a coffee source that's not to far from home, and so far, so good. But today, today folks, I found my coffee Mecca. 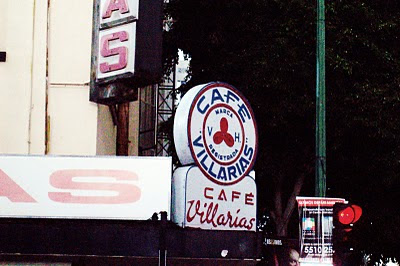 Cafe Villarias.
A small and unassuming building in the city's center, Cafe Villarias is a roaster, and by the looks of the setup, they move a lot of coffee every day. The smell wafting through the street was so enticing you could just follow your nose there.
The beans I purchased were still warm from roasting and the man that served them was one of the nicest souls I've met. It's great to see someone who really enjoys their job and wants to do a good job. That's what you'll find at Cafe Villarias.