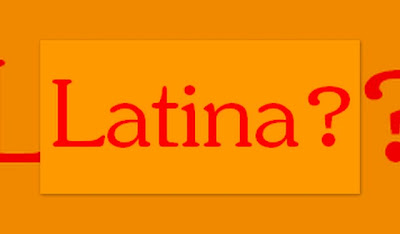 What do you think of when you hear the word Latina?  Honestly, what comes to mind?  There are many answers to this question as there are people who answer it.

Let's be really honest with ourselves.  While we may have very positive images associated with the word "Latina", there may also be some stereotypes persisting. (I'd like to mention that even "positive" stereotypes are limiting at best, and damaging at worst.) The truth is, Latina is not just one thing.  Latina is diversity itself.

I am going to take this time and space (in honor of National Hispanic Heritage Month) to give you a few words & images that come to mind when I think Latina.  No room for stereotypes here, just truth.


Latina = Brilliance
Frida Kahlo is, undoubtedly, one of the most influential artists in history. There is much that can be said about her, but I'll leave you with two links.  One is to "The Two Fridas", as curated by PBS with rollover notations.  The other is to my own account of my visit to "Casa Azul", Frida Kahlo's home and museum in Coyoacán, Mexico City.


Latina = Inspiration
The ability to stay positive and craft your life into what you want it to be is a gift.  The desire and willingness to share that gift is exceptional.  If you've ever read this blog, you know I'm a huge fan of Kathy-Cano Murillo, the Crafty Chica.  She's a powerhouse entrepreneur who does it all.  What's more exceptional is that she pays it forward.  This world is a better place with her in it.  Lucky for all of us, she's not hard to find on the web, especially if you hang out on Art, Like Bread.  So, chicas, here's your crafty content for this post. A few favorite craft links by the Crafty Chica!
Love Haiku Affirmation Card
Empanada Pin Cushions
Motivational Bookmarks
Latina = Literature
Some of the sweetest, most captivating, penetrating, and thought-provoking words I've ever read originated in the minds of Latinas.  Julia Alvarez is but one example. She's a lauded author, scholar, educator, and activist.  I met her at a conference in Great Barrington, MA in 2001. The first thing she said to me was, "Woooah. I can see you're going to make a big change in this world."  What a wonderful, supportive thing for an educator to say.
"Putting books in students' hands
was not all that different
from sowing seeds in a field."
from A Cafecito Story

I chose to pursue my Masters of Education at the University of Massachusetts, Amherst mainly because of one woman: Sonia Nieto.  Those who study pedagogy certainly know her, and those who enjoy a multicultural classroom probably have been touched by her words and ideas.
Latina = Modernity

Mónica Patiño, celebrity chef, melds unexpected flavors into some of the most delightful cuisine to have ever crossed my lips.  Her restaurant, Delirio, is a favorite in D.F., and the hardcore foodies know it.
Julia Y Renata, sisters in style, show clean lines and modern shapes every season at Mercedes-Benz Fashion Week.  I've blogged them twice.

In more ways than one, when I think of "Latina", I think of the world.  I think of people who come from all parts of the globe. I think of well-traveled, self-aware women who gather wisdom from all different cultures.  I've observed through my time in Mexico that it is very common to travel to the United States, Canada, Europe, and South America.  Many people do exchange study in the United States and Canada.

Latina = Brainy
Yes, we all know that Latina = Smart, right? ;) But here's the empirical research to back it up.  In chapter two of Teaching with the Brain in Mind by Eric Jensen, the author explains how learning physically takes place in the brain. In a nutshell, when a person learns something new, a new connection [synapse] is formed in his or her brain.
A learned brain has many synapses.  (Note: synapses are not actually connections, they are more like the tiny gaps between the axon and dendrites, but it's easier to think of them as connections.)
When we learn another language, we not only have more synapses because we know more words, we also have more axons and dendrites with which to form synapses.  We have more "anchors" onto which we can secure new information.  The brain anatomy becomes more intricate, and "denser".

More recently, scientists have discovered that bilingual adults have denser gray matter (brain tissue packed with information-processing nerve cells and fibers), especially in the brain’s left hemisphere, where most language and communication skills are controlled. The effect is strongest in people who learned a second language before the age of five and in those who are most proficient at their second language. This finding suggests that being bilingual from an early age significantly alters the brain’s structure. (Society for Neuroscience, The Bilingual Brain)

No, not all Latinas are bilingual, and not all bilingual people are Latinas, but still!  :)

Thanks for putting up with my academic/reflective/activist side. This blog post took longer than I expected, but I've enjoyed it very much.

You can expect to see some culture talk on this blog, but don't worry, there's much more craft & crochet to come!
Posted by Cami at 8:00:00 AM