From Stashin' to Fashion

I bought about 9 balls of this gorgeous, pink-purple variegated, Italian yarn at 75% off in a posh local yarn shop.  Because it was thin (sport weight or a little lighter), I had intended to use it on a project from Crochet So Fine by Kristin Omdahl.


So, what's the problem?
The problem revealed itself when I tried to crochet the sport-weight yarn.  This yarn is lively.  It's springy.  Drape is not part of this yarn's repertoire.  The construction is difficult to explain, but let me try.  It is a cotton (66%), nylon (32%), metal (2%) blend.  Imagine the nylon as a sheath surrounding a core of cotton.  The metal is interwoven in the nylon.

I wished to make the beautiful, simple, elegant Sprout Chains Shawlette by Kristin Omdahl, but when I started stitching, I just got more and more frustrated.


Was blocking going to help this mess?  (And it was a HOT MESS.)

I felt it was a cape worthy of a poodle, but I myself had no desire to emulate poodle style, no matter how adorable my dear, sweet doggie is.

After stashing the yarn away, and wondering what the heck I could do with it for months, I had a brainwave!  What would happen if I combined the problematic fiber with an easy-going cotton?  I had about 3 spare balls of Omega Trigo, which is available in Mexico.  It was already in my consciousness because I had forced myself to "finish" my Lacy Cropped Cardi by Robin Chachula.  For the entire traumatic story (which starts in 2009) see my Ravelry page.

But I digress.  I put together the Trigo and the Etna, and magic happened.  The yarn was thick enough to complete the Gypsy Duster by the Double Stitch Twins.  The color combination was beautiful.  I had a problem with the pink alone.  Could I bear an entire sweater out in that pink mess?  The lavender mellowed it out and also gave it enough weight to have a beautiful drape.

In addition, the pattern was quick and the beautiful open weave made the color not too overpowering.  The subtle glint of the metal gave it just enough shine.  I felt like I had won the crochet lottery! 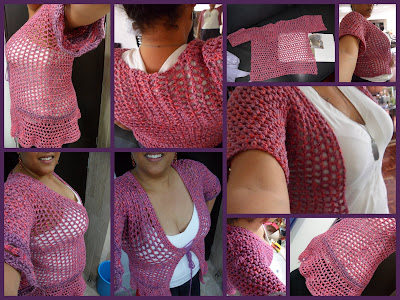 I still have a couple of balls of the Etna, but I'm no longer worried.  I am thinking a market bag or even a hat would be perfect!
Posted by Cami at 11:41:00 PM