Have you ever had a brush with fame?
I was really looking forward to seeing celebrity Drew "The Crochet Dude" Emborsky at CHA Chicago 2010.  I found out that he was going to be teaching a crochet class at the Discover Yarn booth!  The Craft Yarn Council of America sponsored the booth and it had lots of really cool crafts.
Before I attended the event, I made a very detailed schedule (down to the quarter-hour), including waiting in line times to meet all of the craft celebs.  However, as it turned out, CHA was even better than I thought it would be because everyone, no matter how famous, was really accessible and I got to talk with everyone!  I wished I could have had another entire day to enjoy the event.
I took many pictures, but some of them have digitally vanished, including the one of me and The Crochet Dude!  :( 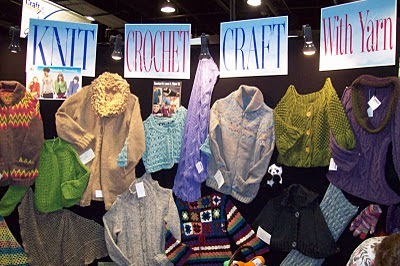 Oh well.  No matter what, I will still have the fond memories of learning how to make a cute necklace and chatting with Drew at the Discover Yarn booth.

Drew was a patient, kind, and skilled teacher.  He was also incredibly funny with his dry wit.  Mom and I had a great time crocheting and chatting with him.  He even signed my copy of Crochet Today September/October 2010

, because he has an article in it on post stitches!  I have noticed that Drew loves to use this technique in his patterns, making them rich, interesting, and textured.  He has probably written a billion patterns, but some of the most exciting right now are in his new book, Crochet It. Love It. Wear it!

While Mom and I were chatting with Drew, we found out that he is the new crochet expert on Knit & Crochet Now, which is a television program that airs on PBS.  If you can't catch it in your area, you can watch episodes online.  In addition, Drew's coming out with a line of Crochet Dude Products by Simplicity!  When does he find time to sleep?
There is much more to tell, but you can stay up to date with Drew on his website, DrewEmborsky.com.

, which is 75% wool to acrylic felt.  In order to accomplish this, we used a needle felting tool by Clover

.  We placed the felt on the needle felting mat, arranged the roving on top of the felt, and pounced the tool (which contains five very sharp, barbed needles) across the roving.  Mom and I both ordered needle felting tools and mats from Amazon.  We really liked this craft.  You can see pictures of my needle felted projects in the slide show above.
Would you like to see a needle felting tutorial?  I might just make one.  Let me know if you're interested by commenting.  It would motivate me to do it sooner than later.  :)
Photo of crocheted necklace by Westcott Brand
Posted by Cami at 10:21:00 PM