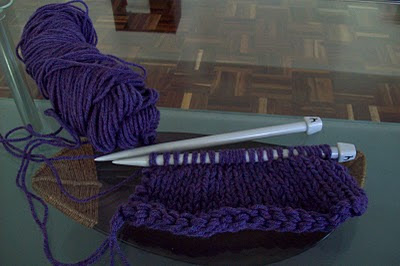 If you read my blog back in 2008, you may recall my review of Vickie Howell's Knit Aid book. I was able to knit after reading it, but, in comparison to crochet, I was slow and unskilled. After listening to this podcast by Sister Diane of craftypod, I made the resolution to learn all that I could about crochet. I read countless books, blogs, and patterns, and learned all kinds of stitches. I crocheted many, many things. Now I feel like an expert crocheter!

In the fiber arts world, crochet is considered by many to be the under-appreciated yarn craft. There are countless conversations about promoting crochet, supporting crochet designers, and advancing the craft. I am completely supportive of such efforts, and prided myself in my crochet-only skill set. Yet, I could hear knitting calling my name, and I knew that I would eventually give in.

Using both Knit Aid and Debbie Stoller's Stitch N Bitch as my guides, I picked up the needles and started to knit. My goal was to read slowly and complete projects until I felt really comfortable with the technique. I think I already knew how to cast on, but Vickie's instructions for the knit cast-on were super-helpful. My first challenge was the garter stitch, English-style, which I found to be fun, but slooooow as I was knitting my cotton dishcloth. I couldn't figure out how to make it faster. I had heard that knitting continental is a lot faster, so I figured I should switch my method. Even with both of my books, I couldn't get it to work for me.

Then something clicked. At night, before I went to bed, I tried to visualize my hands making the movements, and I realized that knitting continental could be almost exactly like crochet for me. I picked up the needles and tried the technique holding my yarn in the way I saw in my mind. It was only later that I realized that I was, in fact, knitting Eastern European. Here's a video by elsteffo of youtube that shows exactly how I knit.

With this new technique, I increased my knitting speed quite a lot. I finished the dishcloth, a kerchief, and a felted bag. 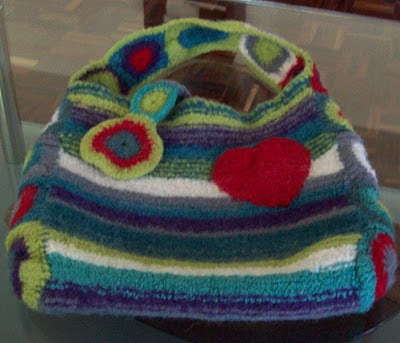 The felted garter stitch bag.
After considering being a garter-stitch-only knitter, I decided I should try to tackle stockinette, which involves the infamous purl stitch. I had the same speed problem with the purl stitch, and my method of continental was not very fast, felt awkward, and produced a stitch that looked different. (In case you are interested, I found a video of the same method on youtube.) However, the stitch it produced looked very pretty. But I was looking for speed here. 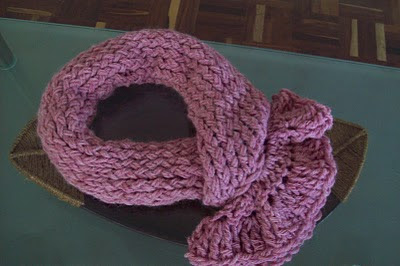 The pretty stitch with "weird" purling.
And, after a youtube search, I found the Eastern European method, which was the answer! It's quick, it makes sense, and (this is the best part) you don't have to move your yarn from back to front! I assume that I will begin patterns & ribbing soon, and I could not imagine trying them before learning this method. I just don't have that kind of patience. Watch this video to purl Eastern European style. Thanks, elseffo!!

Right now I'm working on another felted bag, inspired by the bag my best friend made for me. 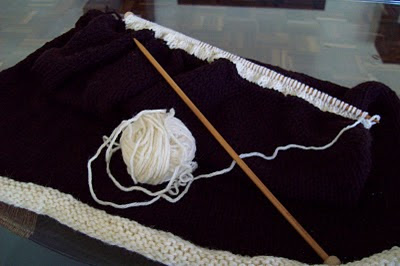 All still images property of artlikebread
Posted by Cami at 1:55:00 PM