It is hard to believe that it has been over a month since I last blogged. Yes, this renegade thing was a bit of a bust on the ATC front, but I decided to give my cards away. I went on a super-crafting-expedition in New York City, which brought me to the far-off Etsy Labs in Brooklyn. (Side note: Whenever I am in Brooklyn, someone seems to mutter "F*ck" on the street. The first time I was there, I was waiting to cross the street and someone yelled out their window "What the f*ck!", as though they expected me to cross in front of them. A simple wave would have done! This time, I heard someone sighing dreamily behind me as I was walking down the street. It was like this: "yaaawn... f*ck.") 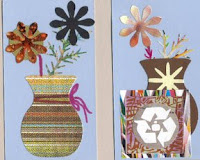 The masterminds at Etsy were having a big ol' staff meeting in the craft area, so I couldn't use the machines like I'd hoped. Hm. At least I got a little tour around the place. Fun! I also hit the village and picked up some rubber at "The Ink Spot", then dined on the Upper East Side with my sweet friend Mary and her poochie Luna. I also hit Kate's Paperie but I wasn't all that impressed. Don't get me wrong, their selection is amazing, but it's all stuff I've seen before. I'm so entrenched in the mainstream that I need something totally different! 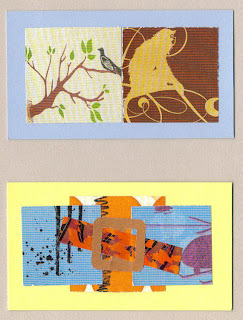 I'll be embarking on my book-making adventure soon, but since a certain person will be getting said book, until it's gifted, it will be shrouded in intense secrecy. Suffice it to say: Pearl Paints on Canal Street is the bomb when it comes to beautiful craft papers.

The pictures above are just some little business card collages I did while sitting at a craft fair table with my mom at St. Thecla's. She did pretty well that day despite the fact that the fair was not at all well attended! I went home and busted out the paper punches. Ahhh.